We live in a world where devices that emit harmful EMF's (Electromagnetic Fields) are all around us - think computers, cell phones, microwaves and more. The Cation Shield™ helps strengthen your body’s bio-field while bathing you with the beneficial effects of negative ions that help combat EMFs by transmuting dangerous positive ions into beneficial negative ions. All you have to do is attach one to any electronic device and start enjoying the protection of the amazing Cation Shield today!

Protection for Body and Mind

We all want to live a healthier, happier, longer and more vibrant life. Unfortunately, it is growing more and more difficult to meet that objective. With all of the technological advances over the past century we are literally creating interference that threaten our health and wellbeing.

That’s why Juuva USA believes in the overwhelming benefits of the Cation Shield. This shield was developed with proprietary, advanced technology and contains unique stones and minerals to help protect you from the harmful effects of your electronic devices.

Strengthening the immune system - high levels of negative ions promote production of globulin in the blood, resulting in stronger resistance to illness.

Promoting better digestion - by counteracting over-arousal of the sympathetic nervous system, negative ions help ease tension in the stomach and intestines, promoting the production of digestive enzymes and enhancing digestion.

The Cation Shield also may reduce the harmful effects of:


This product has not been evaluated by the FDA. This product is not intended to diagnose, treat, cure, or prevent any disease.

Defense Against the Elements

Ions are invisible particles, either molecules or atoms, which bear an electric charge. Atoms, for instance, consist of an atomic nucleus that contains neutral neutrons and positively charged protons, as well as orbiting electrons that are negatively charged. When an atom is in a neutral condition, the number of protons (+) and electrons (-) is equal. When the number of protons and electrons is not the same, the particle becomes an ion that is either positively or negatively charged. Generally speaking, positive ions are harmful to the human body, while negative ions are beneficial.

Positive Ion: an atom (or molecule) that has lost one or more electrons due to a high-energy impact. Natural forces that generate positive ions include the decay of radioactive minerals, radon gas, forest fires, lightning and ultraviolet rays.

Negative Ion: an atom (or molecule) that has gained one or more extra negatively charged electrons. Negative ions are naturally generated by evaporating water. 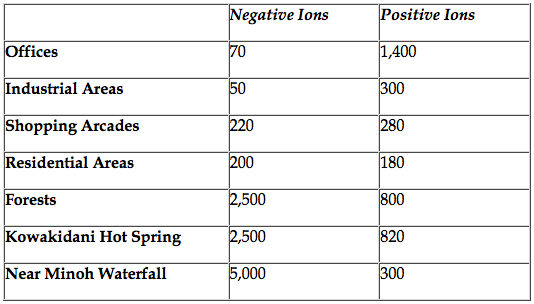 (These measurements were taken in Japan)

Inside typical Tokyo residences, positive ions were found to be 500 times more numerous than negative ions. These findings may be due to inadequate ventilation both in office buildings and energy-efficient houses, as well as from the use of electronic devices that generate electromagnetic fields and from building materials that emit formaldehyde and other toxic fumes. On the other hand, high negative ion levels, such as at waterfalls, hot springs and other highly moist areas, will neutralize positive ions, leading to very low positive ion levels.

These measurements suggest that it is difficult to maintain sufficient levels of negative ions in the present age.

How Positive and Negative Ions Affect Our Bodies 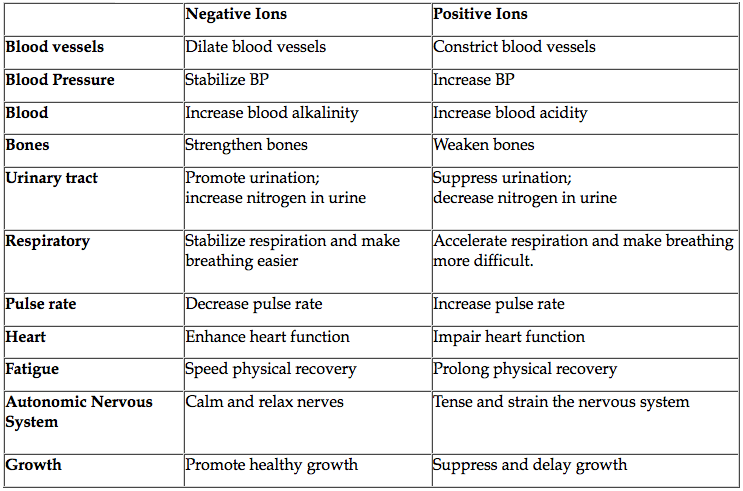 Within both the Anion Emitter and Cation Shield is a proprietary combination of precious stones and minerals, each with unique abilities to consistently target and emit healing properties.

Germanium: Geranium is a chemical element in the carbon group of metalloids. High in antiviral activity, it acts as a powerful antioxidant. Germanium enhances oxygen supply to tissues, and is an analgesic that contains anticancer properties. Germanium may also protect against osteoporosis.

Far Infrared Rays: Far infrared therapy is a type of low energy therapy using light in the far infrared spectrum for the treatment of a health problem.

Scalar Energy: Scalar energy can regenerate and repair itself indefinitely. This also has important implications for the body. Once the charge is implanted, it remains in place with the regular ingestion of charged products. Scalar energy is also more field like than wavelike. Instead of running along wires or shooting out in beams, it tends to “fill” its environment. This becomes very important in terms of developing the technology for embedding products with scalar energy.

Zeolites: Zeolites are microporous minerals that form where volcanic rocks and ash layers react with alkaline groundwater. Zeolite-based oxygen concentrator systems are widely used to produce medical-grade oxygen. The zeolite is used as a molecular sieve to create purified oxygen from air using its ability to trap impurities, in a process involving the adsorption of nitrogen, leaving highly purified oxygen and up to 5% argon. Zeolites are also widely used in industry for water purification.

Tourmaline: Tourmaline is a healing stone known to aid in relieving stress, increasing mental alertness, improve circulation, and strengthen the immune system. It is a powerful agent for reducing toxin-related ailments. It is one of few minerals that emit negative ions and far infrared rays.

Can the Cation Shield be moved and used on a different electrical device after it has been installed on the initial device? ie: If I purchase a new cell phone can the shield be effectively transferred from the old phone to the new one?

The Cation Shield is a round patch. You peel the paper covering from the adhesive on the back and stick the patch on your phone or appliance. You may have to apply some additional adhesive (not included) if you move the patch to another device but, when care is used, the patch will not be harmed by transferring it as desired. 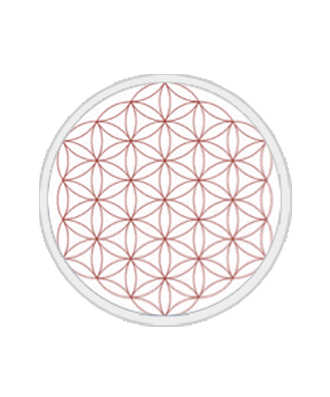 Juuva's Energy Cup is the next generation of creating affordable and portable alkaline water. It contains a proprietary blend of scalar energy.

Each LIVE™ stick pack provides the nutritional servings of fruits and vegetables your body requires daily.